One is my friend “Sam,” 45. He’s a good-looking, charming man who’s had sex with over 800 women in his lifetime (or so he claims). Most of his partners have been one-night stands or short flings. (How else do you get to 800?) He loves casual sex with new people.

The other is my colleague “David,” 48. He’s also attractive (though perhaps not as attractive as Sam), and has had four sexual partners, only one of which was casual. That drunken, college hookup left him wanting, and he considers it a youthful mistake; “I was never much of a one-night stand kinda guy,” he says.

Given what you know about Sam and David, who do you think is more interested in having and maintaining a long-term relationship?

If you’re like most people, you wouldn’t think twice: David is clearly more into relationships than Sam. In fact, Sam probably doesn’t even want a romantic relationship; all he ever cares about is hooking up, right?

The belief that people who are into casual sex are automatically not interested in love and relationships is not just a layman’s assumption: Social scientists display it all the time in their theories and their research. They treat interest in short-term mating as the polar opposite of interest in long-term mating, as if everyone who scores high on interest in casual sex scores low on interest in relationships, and vice versa (an assumed correlation of -1.00). The unidimensional model below provides a graphic representation.

However, it’s not like our lives consist of nothing but sexual or relationship/parenting activities. There’s eating, sleeping, working, exercising, travel, watching TV, going to the movies, reading books… Even those who are most interested in casual sex don’t spend allof their time seducing people and having sex, and even those who are most interested in relationships/parenting don’t spend all of their time with their partners and children. If one wants to, the day is long enough to spend some time on both short-term and long-term mating—especially if spread over the many decades of the human lifespan.

So perhaps wanting casual sex does not automatically mean not wanting love and relationships. Instead of thinking of these desires/strategies as two ends of a single continuum, maybe it’s more appropriate to think about them as two separate, independent continua, one for wanting casual sex and one for wanting relationships (an assumed correlation of -0.00). In theory, some people could indeed be high on one and low on the other, but others could be high on both (a romantic hookup aficionado) or low on both (an asexual aromantic). 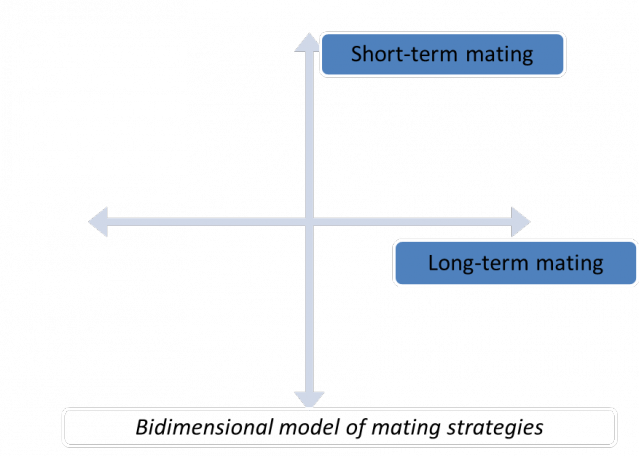 Surprisingly little research has attempted to figure out whether interest in casual sex and interest in romantic relationships are negatively correlated, and if so, whether this correlation is strong (for example, -.85) or weak (for example, -.15). I could locate only two studies looking into this, one published in 2007 in Evolution and Human Behavior, which surveyed 327 students at a Southeastern college, and one published in Evolutionary Psychology in 2013, which surveyed 209 students from a Midwestern university.

Both studies found that wanting casual sex was indeed inversely correlated with wanting romantic relationships. But these correlations were moderate: -.23 in the 2013 study and, in the 2007 study, -.42 for women and -.27 for men. So someone who strongly agreed with the statement, “I can imagine myself enjoying a brief sexual encounter with someone I find very attractive” was less likely to strongly agree with the statement, “I am interested in maintaining a long-term romantic relationship with someone special,” compared to someone who strongly disagreed with the first statement. But there were many people who agreed with both statements or disagreed with both.

Based on these results, it seems that short-term mating and long-term mating are not complete polar opposites of each other, as the unidimensional model would suggest. Nor are they completely independent dimensions, as the bidimensional model with right-angled axes would suggest. Instead, they are distinct, but correlated dimensions, best represented by a bidimensional model that looks something like the image below. In reality, those who love casual sex are indeed more likely to be not as crazy about relationships as those who hate hookups, but many hookup aficionados are in fact highly interested in relationships.

Wanting casual sex with many people does not preclude wanting love and relationships. 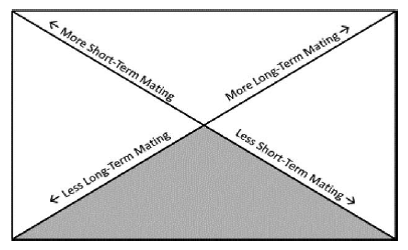 As for my friends Sam and David, they clearly differ in their interest in short-term mating (Sam is extremely high, David is extremely low), yet they happen to be equally, and strongly, interested in long-term mating. They both believe in love, and seek, enjoy, and have had several satisfying, long-term relationships. After one high-school and one college romance, David has been happily and monogamously (he claims) married to the same woman for almost 20 years. Sam was married monogamously for seven years (a marriage that ended despite his best efforts to save it), and is now engaged to another woman he’s been deeply in love with for over four years. Their relationship is not sexually exclusive, but as he says, “My desire to have sex with many different women has absolutely no impact on my love for my fiancée or my commitment to her.”

Where are you on this spectrum? Share your thoughts below or on

Have a casual or group sex story to share with the world? That’s what The Casual Sex Project is for. Join the casual sex discussion on Facebook and Twitter.