Is Casual Sex on the Rise in America?

These days, hooking up seems to be everywhere. Prime-time television is replete with tales of uncommitted sex, mainstream Hollywood produces movies such as Friends with Benefits and No Strings Attached, and the lyrics and videos 0f popular songs are raunchier than ever before.

The heavy presence of casual sex in popular culture creates a sense of a pervasive new hookup culture unique to the current generation of young adults. It also creates a sense that hooking up has replaced traditional dating as the primary means of developing and maintaining relationships among young people, especially college students.

But is that really the case? Or did previous generations have casual hookups just as often, but just didn’t talk about it as much?

Social research on hookups has exploded over the last decade. However, very little research compares trends in casual sex over time, and even less involves national samples of people, as opposed to the typical convenient set of college students. Which is why this new study just published online ahead of print in the Journal of Sex Research is so fascinating.

Martin Monto and Anna Carey of the University of Portland used data from the General Social Survey (GSS), a nationally representative dataset of U.S. households conducted every year or every two years since 1972. (It’s not a longitudinal study; each wave of data collection involves a brand new sample of people). For the purposes of this study, the researchers limited their analyses to young adults (ages 18–25) who had completed at least one year of college. To test for changes in casual sex over time, they compared responses from the 1988–1996 waves with those from the 2004–2012 groups on questions regarding sexual attitudes, general sexual behavior, and, among the sexually active, types of sexual partners. (Earlier waves were not asked the same key questions.)

So what did they find?

As you can see from the graph above, sexually active respondents from the current era were more likely than those from the earlier era to report sex with a casual date/pickup or friend, and slightly less likely to report sex with a spouse/regular partner. There were no differences in sex with an acquaintance or some other type of partner.

So it would seem that today’s youth is indeed having more casual sex, and less romantic sex, than the previous generation.

However, if there had been some profound shift toward more casual sex, we should find differences in general patterns of sexual behavior, such as the current cohort having more sex and more partners overall. But as the second graph below shows, this doesn’t seem to be the case. Respondents from the current era did not report more sexual partners since age 18; more partners during the past year; or more frequent sex than respondents from the earlier era. If anything, they had sex slightly less often than the earlier cohort (though this difference disappeared when demographic variables were statistically controlled for). 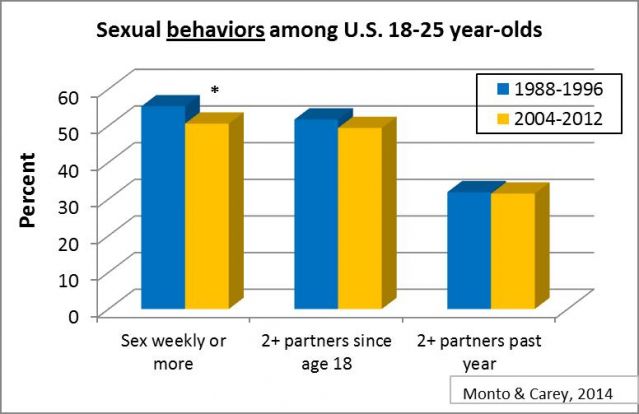 And what about sexual attitudes? Have they become more permissive? Unfortunately, the GSS doesn’t ask about attitudes toward casual sex, but it does ask about attitudes toward other types of sex that might be considered outside of the mainstream (at least until recently). As the final graph below demonstrates (and the statistical analyses support), the only thing that has changed is in attitudes toward gay sex, with the current cohort of youth being significantly more accepting of same-sex behavior than previous generations. Other types of sex? No change whatsoever. Premarital sex is still widely accepted (by ~80 percent); extramarital sex is still widely condemned (by ~95 percent); and teen sex (ages 14-16) is still only accepted by about a quarter of the demographic. 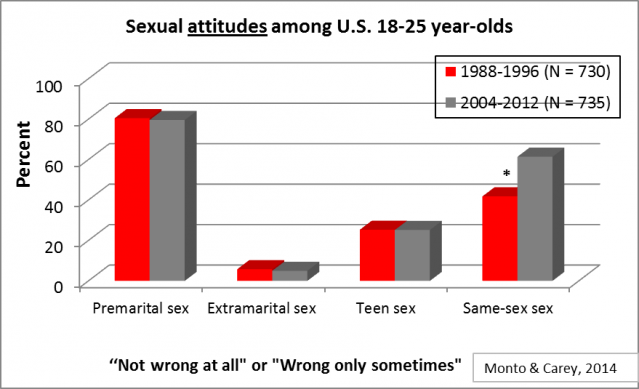 So what is going on here?

First, dating does not seem to be anywhere near its deathbed: The vast majority (over 78 percent) of the sexually active in both cohorts had sex with a romantic partner.

Second, there is no major shift in sexual attitudes (although I’d really like to see data on attitudes toward casual sex specifically—since those may have become more permissive over time, as some non-nationally representative data suggest).

Finally, somewhat more people these days (10 to 15 percent) report sex with a friend or casual date/pick-up, but they do not report more sexual partners or more frequent sex overall. This suggests there may be a modest shift toward casual sex, but it’s a tendency toward replacing some regular partners with more casual partners—not adding more partners. Also, the fact that the most frequent casual type of partner is a friend rather than acquaintance or pick-up is telling: This is more of a friends-with-benefits situation than sex with random strangers.

As the study’s authors propose, these modest changes may indicate shifts in the terminology surrounding sexuality, rather than sexual behaviors themselves.

Have a casual or group sex story to share with the world? That’s what The Casual Sex Project is for. Join the casual sex discussion on Facebook and Twitter.